They are threatened by habitat loss and are particularly impacted by loss of trees. Due to their size and coloring, they are also the most heavily targeted by humans for hunting. Reintroduction for these animals is difficult and has little success so far; however, they breed well in captivity, so proper preparation beforehand could make the repopulation of this species highly successful. Yet due to their breeding in captivity, the captive populations have been descended from too few individuals, so the Species Survival Plan has stated that their breeding must be carefully controlled. 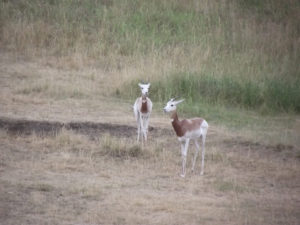 Light reddish-brown coat.  The face, bottom, and rump are white.  White patch on the throat

Parts of Western Africa including Mali, Niger, Chad, and Sudan.

Arid areas with sparse vegetation including the Sahara Desert.