Black Bears were originally hunted to prevent loss of livestock and out of fear. Their pelts and meat were also sought after. Now, they suffer from habitat loss, but their adaptable nature allows them to live in areas close to humans. To protect the Black Bear, there are now protected ranges, they have been reintroduced into the wild, and hunting is regulated. 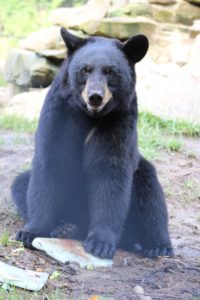 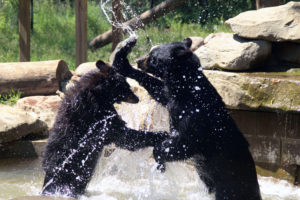 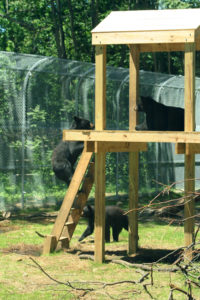 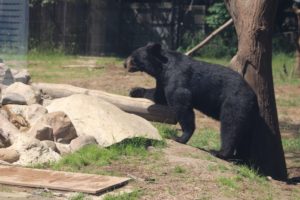 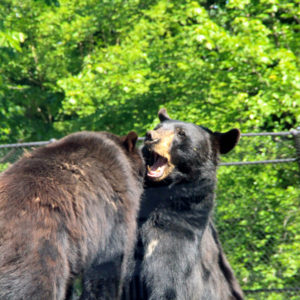 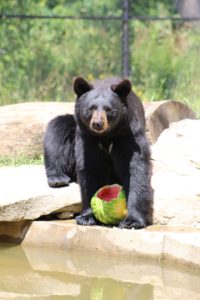 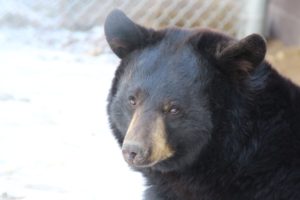 There is variation in the coat color of the Black Bear. While individuals in the west tend to have black fur, bears in the east tend to have the cinnamon or yellow-brown fur coats. Bears along the pacific coast may have grey-blue coats and bears up north may be all white. It has been proposed that the range in color is due to their habitat or that the brown or white coat color may be imitating other bears. They have no shoulder hump and have shorter claws that aid in climbing trees.

The Black Bear was originally found in all forested areas from Canada to central Mexico, but there range has greatly decreased in areas such as the Midwest.

They are a highly adaptable species that can be found in coniferous and deciduous forests, scrub forests, temperate rainforest, and tundra.

6 months. The fertilized eggs have delayed development and do not implant in the womb until November.

Up to 6 cubs are born in January after 10 weeks of rapid development.

Weaned at 6-8 months, but remain with their mother for another 9 months. Then separate to avoid male aggression. The females reach reproductive maturity around 4-5 years old and males a year later.

Black Bears are opportunistic omnivores that eat a wide variety of foods. In some areas, up to 95% of the diet can consist of plant matter such as nuts, fruits, berries, roots, etc. They also hunt small mammals and occasionally larger prey such as deer or caribou. They are well known for consuming human waste products or food as well and may raid dumpsters or take food from campgrounds.

The American Black Bear may be active at any time of the day, but usually forages at night or at dawn and dusk for food. While it has a lumbering gait, it can run quickly, climb trees, and swim. They are generally a solitary species, but when congregations do form, they establish dominance hierarchies. They will hibernate in the winter and survive off of fat stores.

1. They are the most common species of bear.

2. When hibernating, black bears do not eat, drink, urinate, or exercise.

3. Instead of sharp molars, bears have adapted crushing molars.

5. Black Bears have relatively poor eyesight, but a great sense of hearing and smell.

6. Scientists can count the rings on a small tooth behind the canine tooth to see how old the bear is.

Binder Park Zoo houses three American Black Bear siblings. The two males names are Achak (largest) and Koko, and the female’s name is Taima (smallest). They were born in the wild and came to Binder Park Zoo as cubs in the spring of 2012 from Alaska after being orphaned - U.S. Fish and Wildlife Services found the three of them without their mother, so Binder Park Zoo gladly provided a new home for them. American Black Bears are considered the most common of bears native to North America. They are very adaptable to different habitats and are found in many regions of the continent. They are opportunistic omnivores, so they have a wide variety of options when it comes to food. Most of their diet consists of grasses, roots, berries and insects, though they also eat fish and small mammals and have quickly developed a taste for human garbage.

Our three bears all have different personalities. Their temperaments are also affected by the seasons. In the winter they become very lazy and slow, losing motivation to do much of anything. They like to collect hay, sticks and leaves to make their inside holding a bit more like a real den. In the summer/fall they seem to eat nonstop so that they can store up fat for winter. Since they eat so much, they have a lot more energy, which is evident when they are seen wrestling with each other, manipulating enrichment toys, climbing trees in their exhibit and splashing in their pool.

Female Taima, rules the bear exhibit and is quite the instigator; you will frequently see her sneak up on her brothers, swat at them and run away. If she gets into it with her brothers, they are usually the ones to back down first. The boys, Achak and Koko, are very playful and love to wrestle one another. They are all very curious and it is incredible to watch them interact with new enrichment provided by the keepers. Bears are usually solitary in the wild, but because zoo staff ensures our three are well fed, they don’t need to compete for food. That, combined with the fact that they have grown up together here at Binder Park Zoo, has allowed our bears to form a close-knit group. You will often see all three of them snuggled together taking a midday nap in their clubhouse.