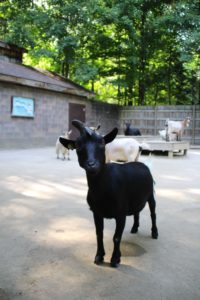 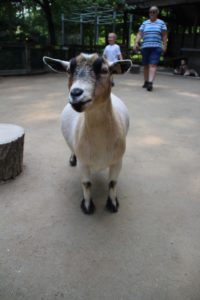 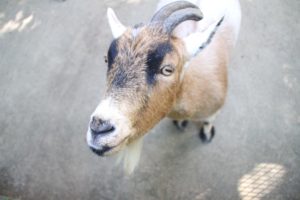 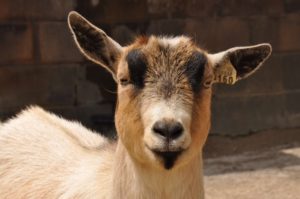 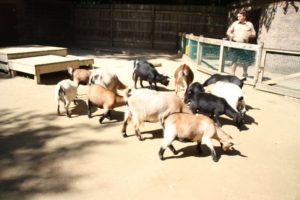 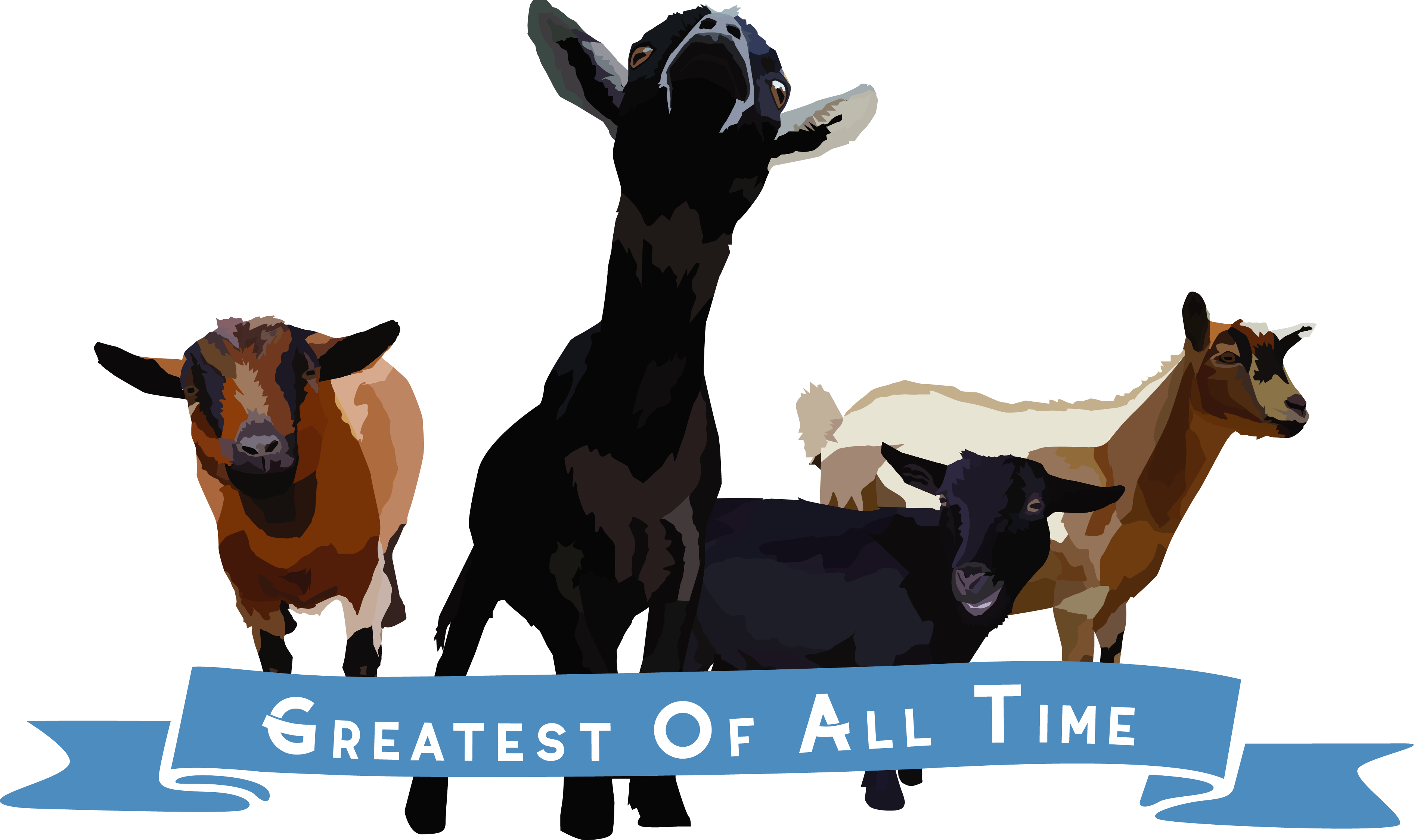 Click on the G.O.A.T. image to learn how you can help give them a new home at the zoo.

From white to black or tan and any combinations

Domesticated goats have been raised in almost all habitats. Goats do require grass for grazing, but can thrive in areas of thin growth that would not support other grazers such as sheep or cows.

A diurnal social herd dweller.  A typical herd will be composed of females and their young.  Males will form bachelor herds.

1. Goats are used for milk (can produce up to 4 lbs. of milk a day), wool, and meat in many parts of the world.

2. Originally from Africa, this breed was introduced to other areas by sailors who found they were easily transported and a ready source of milk and meat on long ship voyages.

3. Goats are ruminants and regurgitate food and chew it a second time to digest it.

4. Domesticated because it is an easy animal to raise, especially in areas where sheep and cattle cannot find enough to eat.

5. Goats are especially well adapted for land that is steep and void of large amounts of vegetation.

6. Both sexes have horns, which curve up and back.  Males use their horns for courtship displays and battles.

Our current herd of African Pygmy goats numbered 13, and all were born on a farm and are all related to each other. Two passed away in 2020 reducing the herd number to 11. Most of the goats were born in 2011 except Neville, Dobby, and Tonks, who were born in 2013.  Each Binder Park Zoo goat has an ear tag as a means of identification.  You can tell if they are male or female by which ear the tag is in. If the tag is on their left ear- it’s a female, if it’s on the right eat – it’s a male.  Some of their favorite activities are sunbathing, playing with toys made by their keepers, getting petting zoo food, being brushed by guests and cuddling with each other. They don’t enjoy slow or rainy or days at the zoo, and they don’t like being separated from their herd, even for a short time.

Hermione is one of the smaller goats and is mostly brown with a black line down her spine, black legs, and bold black lines down her face. She loves human interaction and especially, being brushed. When she isn’t spending time with guests or her keepers, Hermione loves to cuddle up to her best friend, Harry.

Luna is the smallest goat here at Binder Park Zoo. She is the only completely black female goat. She enjoys interacting with the public and snuggling up to her brother, Remus.  While Luna loves to be brushed or petted by the guests, she remains somewhat shy around her keepers.

Remus is mostly black with a white stripe down both of his back legs, a white tail, and one horn that curves outward. Remus is one of our most curious goats and if anything interesting is within his reach, he will surely check it out. He is friendly with most of the other goats as well as humans, and he loves to scratch his head on the antenna of his keepers’ walkie-talkies.

Hagrid is our largest goat, which is because he is part Nubian. Dark brown, black and white, Hagrid has tan markings on his face. He also has two scurs - under-developed horn growths. Hagrid is very food-motivated and loves to eat the goat feed from guests – he is usually first in line if that possibility exists! When he isn’t eating, Hagrid enjoys hanging out with his best buddy, Severus.

Severus is the largest black goat. His curved left horn and right scur make him easy to identify. Severus loves people, and will often approach them in search of attention. He enjoys being groomed and is among the friendliest of the group.

All four Weasleys resemble each other with light tan fur and black and white throughout. In the story, Fred and George are identical twin brothers and while goats Fred and George are not twins, they do look very much alike! Both have little white beards, and Fred has rather long hair just on his back legs making it look like he is wearing pants!

Ron was a goat that seemed drawn to people – he loved attention from humans! Sadly, Ron passed away in April 2020 and he is missed.

Ginny seems to be one of the most photogenic goats – always posing for the camera. Ginny is the largest female goat making guests wonder if she is pregnant (She is not.) Ginny has a distinct call and her keepers can easily recognize her voice.

Dobby had a sweet personality goat, typically hanging out with her pal Ginny. Unfortunately, Dobby passed away in October of 2020 and we miss her.

Harry is all black with a white nose, ears, and tail – he is one of our smartest goats. He loves when his keepers put him through the “goat obstacle course.” He has mastered the teeter-totter, walking it as it rocks up and down, he runs through tunnels, and hops from When he completes his obstacle course, he always gets rewarded with a little treat. Harry recognizes when his favorite people enter the Miller Children Zoo and will wait by the fence to get some head scratches or petting zoo food from them.

Neville is one of the smaller black goats and next to Harry, is one of the few goats who enjoys training. Neville is quite food motivated and will chew on just about anything he can get to. He is very friendly and loves getting scratches.

Tonks is light brown and one of the smaller goats. While Tonks is short in stature, she is quite often found standing on the tree stumps, seemingly wanting to be taller! She will also run the obstacle course for positive reinforcement!