May have been extinct in the wild since 2007 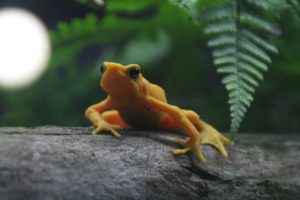 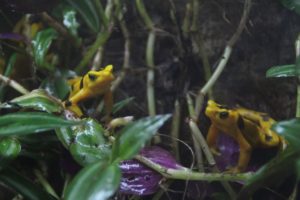 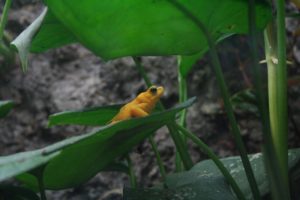 Golden yellow to yellow-orange, with or without black spots

The eggs will hatch after 9 days as tadpoles and an adhesive area on their undersides help keep them from being swept away. When they metamorphose into juvenile frogs, they are green with dark markings.

Live permanently near cool running streams in high elevation forests. Males are highly territorial and stake out territories on rocks near streams. The males use their territories to call for females and will defend their territory against other males. Males have been known to wrestle each other for prime territory near a stream.

1. Golden frogs produce toxins in their skin that protect them from predators.

3. Sexual dimorphic; the females are up to twice the size of an average male.

4. Populations have been hit hard by the Chytrid fungus, which has been responsible for decreases in many amphibian populations around the world.

5. Unlike other frogs, golden frogs do not have eardrums. They can make whistling noises but these calls are not used to communicate to other frogs. They communicate by using a form of sign language called semaphore. They “wave” their hands and raise their feet to defend their territory, attract a mate or greet one another.