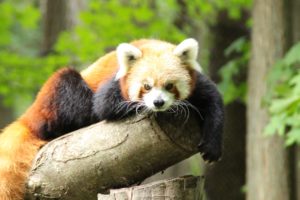 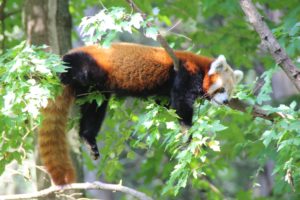 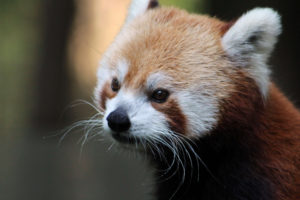 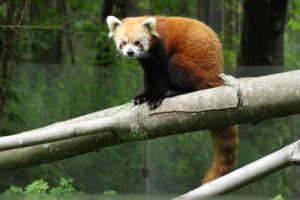 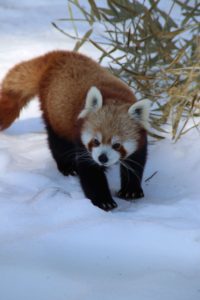 Overall reddish fur, with banded tail, large round ears with white fringe, two black stripes from the eyes down on the cheeks

1. Have an extremely low metabolism, comparable to that of a sloth.

2. There is an estimated less than 10,000 mature individuals in the wild with over 10% decline in population over the next 3 generations.

3. Sole species in the family Ailuridae. They have similiarities to both Raccoons and Bears.

Tushar is Binder Park Zoo’s male red panda. He was born on June 19, 2008, and is considered somewhat old for a red panda, but in captivity, it is estimated that they can live up to 15 years. Despite Tushar’s cute exterior, he can be somewhat grumpy and finicky at times. He is also very curious. He is always interested in what keepers are doing or what they are bringing him when they are around, although if you get too close, he will run away. Red pandas are native to the Himalayas, so they prefer colder temperatures.

Tushar particularly loves when it’s lightly raining- you may find him curled up at the top of his log when it’s misting out instead of being tucked away inside. You can also catch him sleeping high up on a branch on beautiful days - a natural behavior of wild red pandas, as they are naturally arboreal, meaning they live most of their lives in trees. Tushar was born in captivity at the Smithsonian National Zoo and came to Binder Park Zoo in 2011. Red Pandas are considered endangered in the wild due to habitat loss from deforestation because of logging and the spread of agriculture.