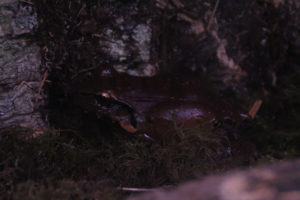 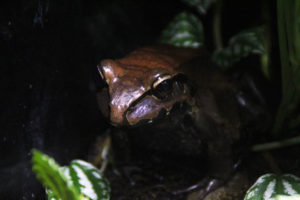 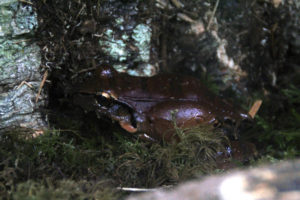 Uniform gray to reddish brown, with reddish and black spots and stripes. A bright dorsal skin fold from the snout to the end of the back. The underside is dark gray with white to yellow molting or tiny white speckles.  Young frogs are more brightly colored than adults. Eyes are large and reddish.

Eggs hatch in 3 days and the young metamorphose in about 4 weeks.

Nocturnal, stay in hiding during the day.  Find shelter in burrows, beneath logs, between tree roots, or under houses. Juveniles often active during the day. Males are territorial.

1. Secrete huge amounts of toxic mucus.  People can get skin rashes and stinging from touching one and can also have sneezing and eye swelling from just being in the same room as one being handled. Leftover residue is even lethal to other frogs.

2. During mating, male creates a large foamy mass around the fertilized eggs which consists of a mix of sperm, skin secretions, water, and air.

3. Tadpoles are giant and initially feed on the foam mass before becomeing carnivorous, and consuming eggs and tadpoles of their own or other species.