In the 1920s, about 1,000 pelts were traded in the fashion industry because of how popular they were. Their bones are also sought after for traditional Chinese medicine and farmers will kill them to protect their livestock. They are now protected by CITES (Convention on International Trade in Endangered Species). People are working to prevent hunting or retributive killing of the Snow Leopards and building habitat corridors. 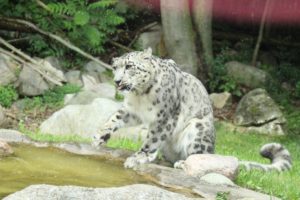 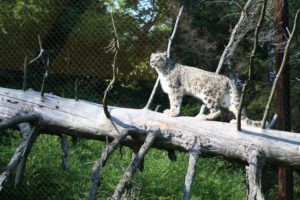 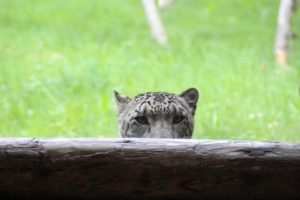 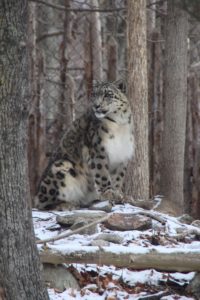 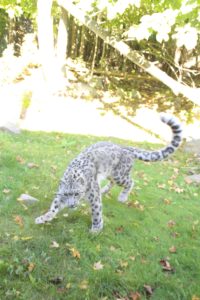 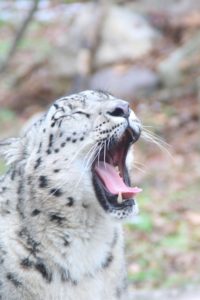 White with dark grey to black rosettes and spots. There may be a yellow tinge to the fur. They have long and thick hair (up to 5 inches thick), wooly belly fur, and large paws. It has shorter forelimbs and longer hind limbs that allow for greater agility in the mountains.

Central Asia. Most Snow Leopards are found in China, specifically in the Tibetan region, but they can also be found in Mongolia, Nepal, India, Afghanistan, Pakistan, Tajikistan, and Russia. They are found in the Himalayas.

Located in remote mountainous areas, they are found between 3,000-4,500 m in steep terrain with rocks and cliffs. They will live above the tree line in summer and may come down further in elevation during the winter.

Early January to mid-March. They are polygamous.

They are opportunistic predators that eat wild sheep, goats, occasionally livestock, and some small animals. A large animal is typically killed twice a month, but they will take smaller animals much more frequently. In captivity, they are given 2.5-3.5 lbs. of meat diet daily.

Snow leopards, like other cats, are solitary, although the home range of males and females may overlap. They use their large paws as snow shoes and their tails for balance. They will mark paths within their territory with claw marks, feces, and scent.

1. The tail is almost a meter long and thick. It is used for balance and is wrapped around the snow leopard for warmth.

3. Snow leopards can kill prey up to 3 times their weight.

4. They have an enlarged nasal cavity that warms the air as it breathes in.

Raj loves Michigan’s winter weather and is well adapted for it- you’ll frequently see him playing in the snow. Snow leopards live in mountainous regions and are equipped for the cold and snow. They have very large widespread paws that increase their surface area, thus acting like snowshoes and allowing them to walk on top of the snow instead of sinking into it. They also have large, bushy tails that they can use to wrap around their necks and faces to keep them extra warm.